After Cyberpunk 2077 on legacy consoles, you appreciate the work of people porting modern games to Nintendo Switch even more. Of course, there are failures like The Outer Worlds (which was improved a bit with the last patch), but mostly such versions turn out to be decent. Usually, the developers of the original do not deal with them, entrusting the work to third-party teams like Panic Button . This studio has already ported Rocket League , Wolfenstein II and Warframe to a hybrid console, and recently released DOOM Eternal .

There were several unpleasant incidents associated with Eternal : it turned out that at the same time as the rest of the platforms, Switch owners would not receive the game, then they did not remember it at all for several months, then there was information about the cancellation of physical editions. It turned out that the fears were in vain – although the graphics had to be worsened, the shooter on the Nintendo console looks adequate and plays great (with some reservations). But the physical edition is still not planned – prepare 18.8 GB for the digital version.

The visual beauties were clearly “undercut”: the textures are not as clear as on other platforms, and the resolution changes periodically – this is especially noticeable in large locations with a bunch of opponents and platforms. In the stationary mode, the “blurring” of the picture is a little more striking than in the portable one (although it is sometimes difficult not to notice it there too), but it does not interfere with the gameplay – I have never had a situation when I could not win because of poor visibility … In the videos, the graphics also look good.
Most impressive is the stable frame rate. Even if it is 30 frames / s instead of 60, but the almost complete absence of drawdowns allows you to enjoy the game. It doesn’t matter what you do – just jump and search for secrets or fight with two dozen demons – what is happening does not turn into a slideshow. This is taking into account the fact that the locations were not modified – all sorts of figures walking in the background, flashing lightning and other details remained in their places.

The number of opponents at locations did not have to be reduced. You are still constantly in motion, dodging enemy shells, setting fire to monsters for armor, using a chainsaw to replenish ammunition, making double jumps and dashes – this is exactly the same DOOM Eternal , which differs from other versions only in less impressive graphics. However, when you start another shootout and immerse yourself in the gameplay, you no longer want to think about textures.

It’s not that simple in hell

The main issue with Eternal on Switch is control, especially when it comes to handheld mode. As great as the “joycons” are in terms of HD vibration and other cool “tricks”, they are not very suitable for shooters because of the tiny sticks. On the other hand, in the “portable” you can aim with the help of the gyroscope – this time its support was added immediately, and not after a few months, as was the case with the last DOOM . You also experience inconveniences because of the frequent need to press R3 to interact with objects and finishing moves. 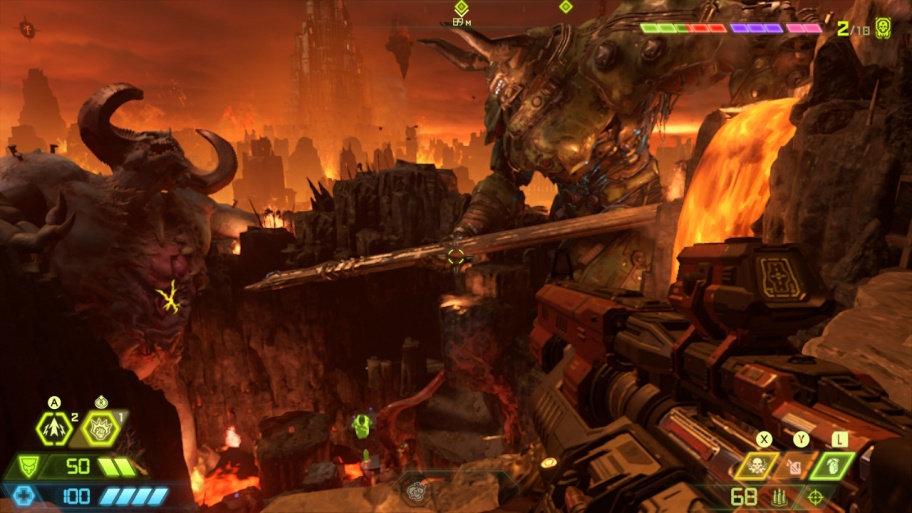 In the screenshots, the “blurring” is too noticeable – the game looks better in dynamics.
But the downloads do not disappoint and do not take a minute. In case of death, it takes from five to seven seconds to wait at all, which will not impress PC players, but for a portable platform this is a decent result. And during the passage, no loads were noticed – this is not The Outer Worlds , where in the middle of the journey to the next point you hang for a few seconds and wait for the appearance of objects.

As for the game itself, it remains one of the best shooters of our time. The audience treats Eternal differently: some people like that id Software did not create a complete copy of their own DOOM 2016, others could not get used to the colorful interface and controversial innovations. The need to actively use a chainsaw to get ammo, set fire to enemies for armor, shoot at weak points, and so on make the shooter very fun. At the same time, Eternal is one of those games that are very different on the gamepad and keyboard / mouse; if possible, pay attention to the PC version. 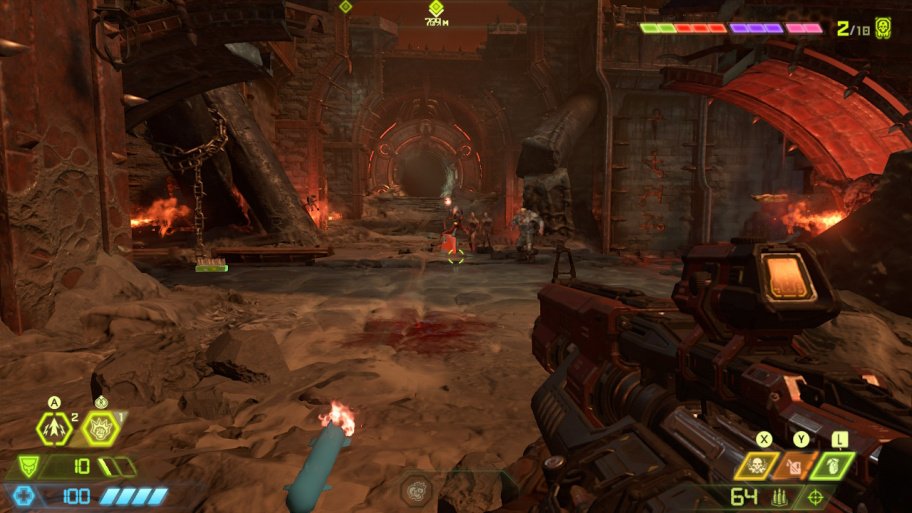 For those with a mastery of gyroscope control, the Switch version is even easier than the PC version.
It is important to remember about the difference in prices – on Steam the game costs 1,999 rubles. (and it will be much cheaper on sales), and on Switch, they are still asking 4,499 rubles for it. Of course, Bethesda is more willing to discount games than Nintendo on its exclusives, but the difference will still be noticeable. By the way, those who bought the game on Switch before December 22 will receive several bonuses: a premium skin for a revenant in BATTLEMODE mode, a master level “Cultist Base” with its own challenges, as well as a shotgun design in the classic Doom style. So far, nothing has been said about when the additions will be released on the hybrid console. ***
The Switch version of DOOM Eternal is obviously not the best way to get to know the game, but the port is made to last and could hardly get any better. The frame rate is stable, the locations have not turned into a set of colorful boxes and have remained the same creepy, and the gameplay has not changed one iota. The Panic Button team once again demonstrated their talent, and the buyers received a decent version, in which there is no desire to complain about shortcomings.