Atlus took a long time to announce a localized version of Persona 5 Scramble: The Phantom Strikers , mockingly asking about the English translation in polls. Now the date is finally known – on February 23, 2021, the game (the name will be shortened to Persona 5 Strikers ) will be released in the West not only on the PlayStation 4 and Nintendo Switch, but also on the PC. We attended the presentation dedicated to this version and carefully studied the half-hour gameplay video.

Although Strikers takes place after the Persona 5 denouement, the game will be interesting even for newcomers unfamiliar with the universe. Sure, fans will notice the references and have a better understanding of the characters' relationships, but for the most part, this is a completely new story. And the gameplay of the games is different – if in Persona 5 the battles were turn-based, then here the “combat” is hybrid, combining real-time fights with the ability to pause the battle and decide on the next action.

The plot begins six months after the Persona 5 finale, with the Joker and Morgana returning to Tokyo to meet the rest of the Phantom Heartreavers. To better prepare for the summer holidays, the guys install an application on their smartphones, through which they can subsequently get into alternative versions of cities – in the last game they visited palaces, but here such places are called prisons. The essence is the same – in prisons it is necessary to cleanse the souls of certain people so that in reality they become better. The press release states that the characters will visit six cities in Japan.
All Heartreavers will be playable – they have unique abilities and personalities. At the presentation, we were shown only the Joker, a distinctive feature of which is high mobility and attack power with a dagger in close combat.

The gameplay demo started with a walk around the city – as in Persona 5 , you can freely move around Tokyo, watching loading screens between small locations, such as the subway station in the Shibuya area and the LeBlanc cafe, on the second floor of which the Joker lives. As soon as we enter the room, the whole team is assembled – it remains to decide whether we go on a sortie right away or look into the Velvet Room to change personas, visit the store or discuss the situation with friends. 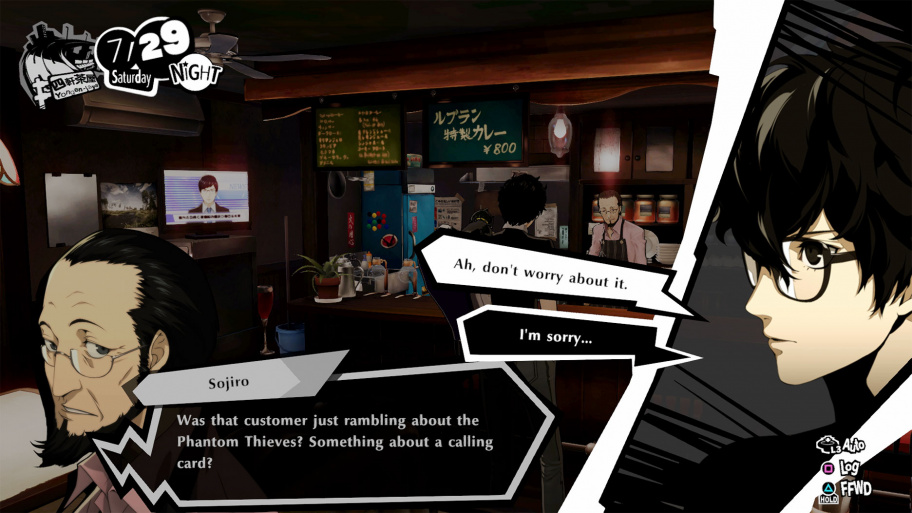 The choice of lines in the dialogues has not gone anywhere.

A special operation to save the inner world of a certain Alice begins with a dialogue between all the main characters – in addition to the acquaintances of Morgana, Futaba, Makoto, Yusuke, Ann, Ryuji and Haru, there is a new character, Sophia. How she got into the team is unknown (we were not shown the very beginning of the game), but this will probably be explained – as in Persona 5 , all the characters here are very talkative. And in an ordinary city there will be a lot of dialogues, and the study of the prison is regularly interrupted for conversations.

A group of four people is sent on a sortie, you can switch between them by pressing the buttons on the crosspiece. After choosing companions, we find ourselves on a large location, through which opponents scurry. As before, you can sneak up on them from behind to take them by surprise and gain an advantage in battle. The main differences of the combat system are striking right away – although the player attacks a single monster, after the attack, about a dozen opponents appear in his place. Despite their numbers, the battle ends many times faster than any fight in Persona 5 , due to the lack of turn-by-turn behavior. 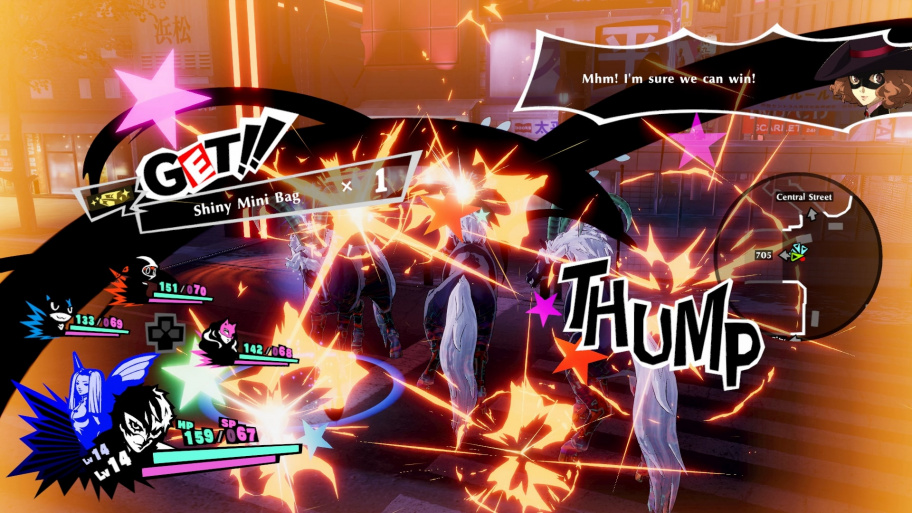 Do not be alarmed, in the dynamics of the battles do not look so scary.
Against weak “mobs” ordinary attacks will do, but it is advisable to kill strong opponents (who even by their appearance hint at a large supply of health) with abilities. To use them, you need mana, and some skills consume part of your health when activated – if you don't take damage, it is gradually restored. To make it easier for the player to understand which skills are suitable in a given situation, Futaba sometimes gives hints and informs about the weaknesses of enemies. And your comrades will help to crush the strongest – you can not only choose for yourself who to pass the baton to, but you will also receive hints about who to switch to for a powerful attack.

It is difficult to evaluate a combat system until you try it yourself. The development of the game was carried out by the Omega Force team, who ate the dog at musou games in the spirit of Dynasty Warriors and with each release tries to offer more and more interesting possibilities. The recent Hyrule Warriors: Age of Calamity confirms this – in terms of gameplay, the project is very good. Strikers left the same impression. 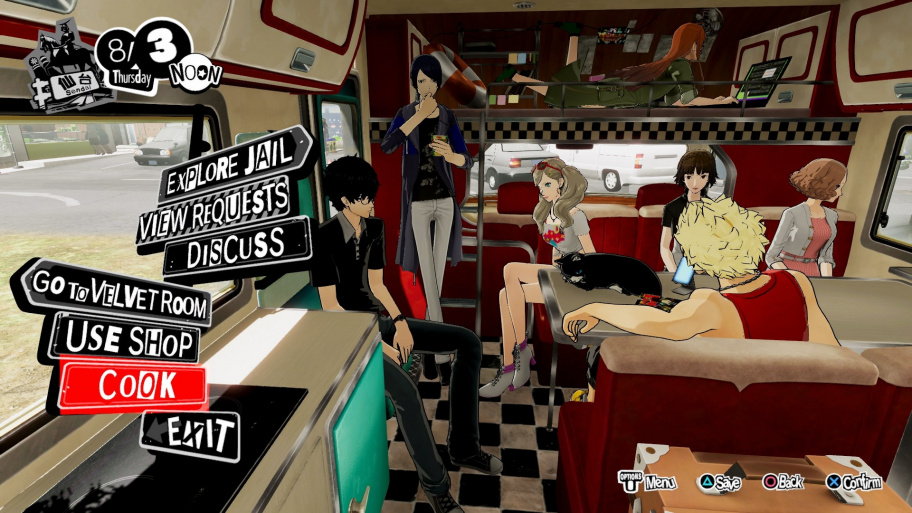 Unfortunately, the cooking was not shown.
Many gameplay elements migrated here from Persona 5 . The Third Eye ability allows you to scan the environment and find out the strength of the monsters inhabiting the prison – there will be a red aura around the strong, and the weak will give themselves out blue. Also, this skill indicates the weakness of enemies and the chance of getting their masks. The character can jump onto cars or buildings (only in certain places, of course) to make it easier to hide and make a surprise attack. Here and there useful items are scattered and chests are hidden.

The alarm level indicator will also return, forcing the player to leave the prison (and lose the opportunity to open the chests) if he too often caught the eyes of opponents. In Strikers, it is a little harder to remain undetected due to the flying guard drones, but if you use the environment wisely and climb higher, it is not difficult to stealthily attack them. To avoid having to start the passage of the prison anew, save points have been placed in sufficient quantities. You can return to them if you want to improve your health or relieve anxiety – there are no penalties for using them. 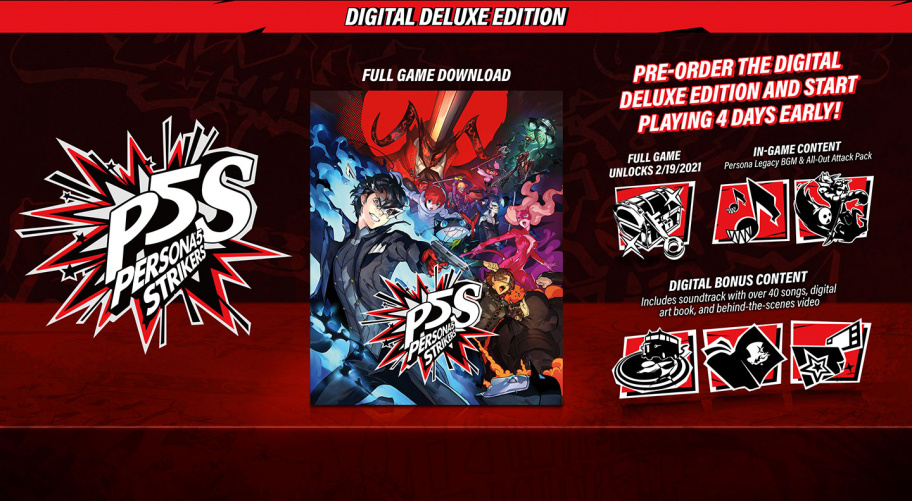 Digital Deluxe Content. ***
It's too early to draw any conclusions after what he saw – Strikers , like Persona 5 , will certainly be a very big game, and only a tiny piece was shown at the presentation. So far, everything looks atmospheric, fun, and most importantly, as stylish as the original. In the case of the same Age of Calamity, these developers managed to make the game as similar as possible to Breath of the Wild , drawing an identical interface and adhering to a familiar style. Strikers is recognizable as Persona 5 with its splendid transitions from exploration to combat, beautiful character portraits and pleasant menus. The only disappointment was the downloads, which last ten seconds on PS4.

Persona 5 Strikers Deluxe Edition customers will have access to the game four days ahead of release on February 19th. This version will also add a digital artbook, soundtracks for this game (over 40 songs) and series numbered parts from Persona 1 to Persona 4 Golden , a music creation video and a bunch of in-game bonuses. The PS4 version will be available on PS5 thanks to backward compatibility.