With a fictional open world of several real national parks, three main types of activities intended to broaden the spectrum of the venerable Steep released in 2016, a massively multiplayer aspect capable of placing up to 64 players in a single race, and downright seven studios. Different Ubisoft at work on the project (Annecy, Belgrade, Berlin, Kiev, Montpellier, Pune and Odessa), the French publisher has really put the dishes in the big for this Riders Republic. The result is undoubtedly pleasant, but the adventure still suffers from some very real flaws despite all the efforts made.

Ubisoft and the open worlds, this is a love story that has lasted for many years and is not about to end. Riders Republic's open world has the particularity of being only partially fictitious, because it is inspired by real places. The map has the good idea to take the topology of different American national parks (Mammoth, Yosemite, Grand Teton, Zion, Sequoia, Bryce and Canyonlands) and to assemble these different elements in a playing field as vast as it is varied. This method makes it possible to offer very different biomes and therefore to go very quickly from a snow-capped mountain to a green plain with flowing streams, or even from an arid desert canyon to a relatively dense forest. Suffice to say that strolling in this mega-park turns out to be rather pleasant. If the graphics engine does not offer anything exceptional, it still fulfills its role correctly, in particular thanks to pretty lighting effects, an optional subjective view which increases the speed effect tenfold, and nice and realistic traces left in the snow. . Far from having a purely aesthetic interest, the variety of landscapes is above all there to allow the different disciplines of the game to express themselves fully. Three main categories of sports, which can roughly be divided into six sub-categories, are thus available to the player: cycling (races and tricks), skis and snowboards (racing and tricks), and aerial ( wingsuit and rocket wing). It is possible to switch from one equipment to another at any time, and even to simplify your life when moving from event to event thanks to much faster additional means of locomotion (snowmobile, rocket bike, rocket skis, etc. paramotor …). 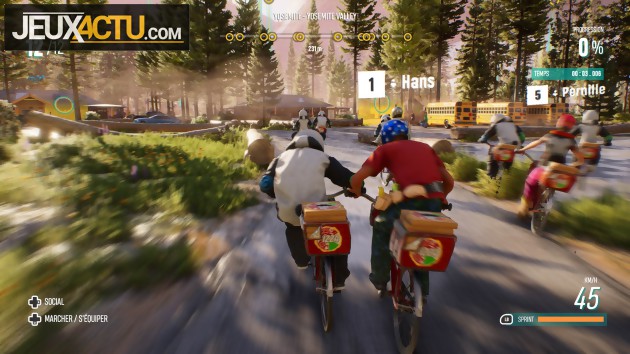 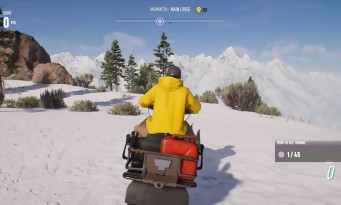 All equipment, whether dedicated to competition or exploration, benefits from arcade-style gameplay, and therefore immediate handling. Some picky gamers and simulation enthusiasts may be upset, but we have to admit that this accessibility enhances the initial enjoyment of the game. And between the different difficulty levels, the need to place tricks embellished with grabs to get as many points as possible, and the possibility of eliminating the automatic landing, there is still plenty to do for lovers of challenges and “skill”. Achieving good scores also makes it possible to win more stars (one for each race completed and one for each optional challenge completed), and therefore to advance the career of our avatar more quickly, which allows in particular to unlock equipment. always better and additional tests on the map. Knowing that the highest experience level is reached at 7000 stars, a strong lifespan is guaranteed. 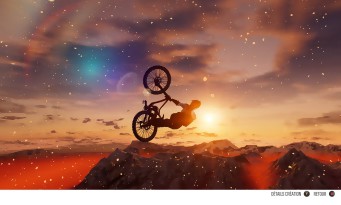 The multiple base events and special events can also be played solo against ghosts of other players, or directly in multi. The most massive races bring together up to 64 players, which is always good to take even if the action on the starting line turns out to be quite chaotic and unreadable. Depending on the type of event, the game recommends activating the Pilot (for races therefore) or Trickster (for stunts) controller configuration instead. The first requires using the buttons to perform the tricks but gives control of the camera thanks to the sticks, while the second allows the tricks to be released in a more natural way thanks to the sticks but prohibits any control of the camera. These two proposals, accompanied by the possibility of switching from one to the other as soon as desired, clearly stem from a desire to do well and to adapt to both different tests and different tastes. players. But this duality also indicates that the developers failed to find a “magic” configuration that would instantly suit all situations. 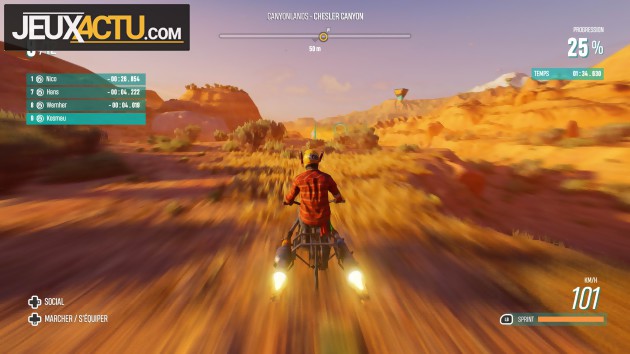 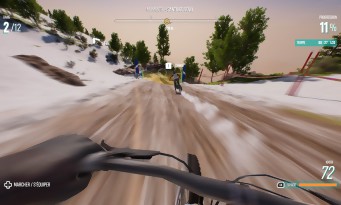 This small downside is unfortunately not the only one, the game failing to achieve the perfection of a Forza Horizon (from which it is clearly inspired). Thus, if a rewind function is present, it does not apply to other virtual solo competitors, and therefore ultimately makes us waste time. The management of physics is quite confusing. Sometimes certain obstacles let us pass while we expected to eat them in the face, and other times a simple stone stops us in full swing in a rather unexpected way. In addition, the scripting of the career misses the mark as regards the atmosphere. The dialogues in particular breathe clumsy youthism, and multiply the outputs to the limit of the ridiculous (“one surpasses oneself while keeping the class” and one unblocks “of the stuff coolos”). The overly emphasis on fun and neon colors, along with wacky outfits and clownish dance emotes are more often uncomfortable than entertaining. In order to stay young, let's say it's quite often cringe and uneasy. The challenges of the Shackdaddy Bandits, events a little more delirious than the others (black and white race on wooden skis, pizza delivery…) still stand out positively. This is not the case with the store, some cosmetic items of which are only accessible by paying real money. The curse of micro-transactions has struck again. Let's end on a positive note anyway: the different radios offer us more than 80 different songs, some of which are performed by big names (Aphex Twin, Awolnation, Ice-T, Green Day, Petit Biscuit, The Offspring, Vitalic, Wiz Khalifa…). 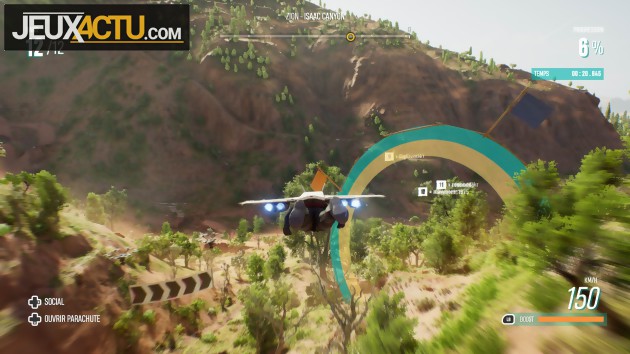