Those who play any part of Pokemon will be shocked at how similar Temtem is to it. This is no longer a simple inspiration, but in some places outright plagiarism. This reaction is very easily explained – despite the multimillion-dollar sales of Pokemon on Nintendo consoles, no one has tried to create something similar, so there is nothing more to compare Temtem with. At the same time, Temtem looks much more solid against the background of Sword & Shield and offers opportunities that should have appeared in Pokemon long ago, but still remain only in the imaginations of fans.

Pokemon, but not those

They begin to quote the original source right away: we create a character, get a tempedia (instead of a Pokedex), get to know a friend and go to the professor to choose our first temtem – of course, considering three candidates. After that, we get resources and set off on a free float. The developers did not add a normal plot – at first glance, there are slightly more dialogues than in Sword & Shield , but the depth in them is just as small.

To keep Nintendo from waving about copyright law, Temtem modified the core gameplay elements, although their essence remained the same. We don't throw Pokeballs here – you need to catch Temtems using cards. Pocket monsters do not fight alone – we always summon two Temtems at the beginning of a match. Well, outwardly, the creatures, of course, are unlike Pikachu, Charmander and everyone else – they are the same bizarre animals and plants, only we see them for the first time.

The capture process even takes the same amount of time as in Pokemon.

They did not change any details. To get new Temtems, you need to hunt wild creatures, running in the tall grass and hoping for luck. It's a pity that nowhere is it specified which monsters are found in a particular area – in Sword & Shield, filling in a Pokedex is a little easier. The main team consists of six Temtems – the rest of the caught ones are added to the bank, from where they can be taken if necessary. And they need to be treated either with special items or in special zones – unlike Pokemon , here consultants in clinics do not do this.

One of the main differences between the game and the Pokemon series is the battles with people who stand every twenty steps near the roads. In “Pokemon” the trainers are absolutely helpless – with one or two pitiful creatures, it is simply impossible to lose to them. Fans have long been asking the developers to add a more difficult mode so that the casual audience does not scare away, and it becomes more interesting to play.

Temtem, on the other hand , does not regret the player at all, immediately starting to throw him coaches with impressive collections. And it's not only the number of enemy monsters (there are often three or four of them), but also their level – and the higher it is, the better the creature's health, speed, attack and defense indicators. As a result, you end the fight with the wounded Temtems, use the first-aid kits more actively, sometimes run back to the healing station before continuing your journey. It's great – you pay much more attention to tactics in battle. In cities and beyond, side quests come across. Some are not executed immediately.

Fights are similar to “Pokemon”, but the rules are slightly different. There, each technique has a limited number of uses, which is replenished at healing points. Here, the main parameter is endurance: it is spent on activating skills and is fully restored after the battle. The scale is partially filled and after each turn – for example, you had eight units of energy, on your turn you used the ability for five units, but on the next you will be able to activate it again, since a small part of the stamina will return.

You can perform the technique without a sufficient level of energy, but unpleasant consequences await you – the temtem will not only inflict damage to itself due to exhaustion, but also miss one turn. And since the fights in themselves are not as simple as in Pokemon , you begin to closely monitor this parameter so as not to lose all the creatures because of the desire to quickly deal with your opponents. I would not say that this leads to grinding for the sake of improving characteristics, but in Pokemon I constantly fight, looking for new monsters in the grass, and in Temtem I play the same way – accordingly, those who want to just go through the story (why?) May have different impressions. Only the same creatures come across for a long time, and this is frustrating.

Often in the grass you come across not at all those whom you were looking for.

In order to perform better in battles, it is advisable to understand the weaknesses of the monsters – as in Pokemon , creatures belong to categories of more than a dozen: fire, water, electric, poisonous, and so on. Fiery ones are dangerous against natural ones, crystalline ones leave no chance for electric ones, air ones are well protected against earthen ones and destroy poisonous ones. Since you summon two Temtems at the beginning of the fight, it is more logical to take completely different creatures – there are more chances for a quick victory. This is also true for cooperative passage with a friend – another thing that is not in Pokemon .

Temtem generally puts a lot more emphasis on multiplayer, but never imposes online. The game can be played without contacting other users, without exchanging finds with them, without participating in PvP and without communicating in the global chat. The mere fact that there are people around you with nicknames over their heads makes the world livelier – someone is sitting on the ground, someone is fighting with coaches, someone is running in the grass and trying to catch someone. Against this background, the “wild zone” from Sword & Shield looks especially pathetic. 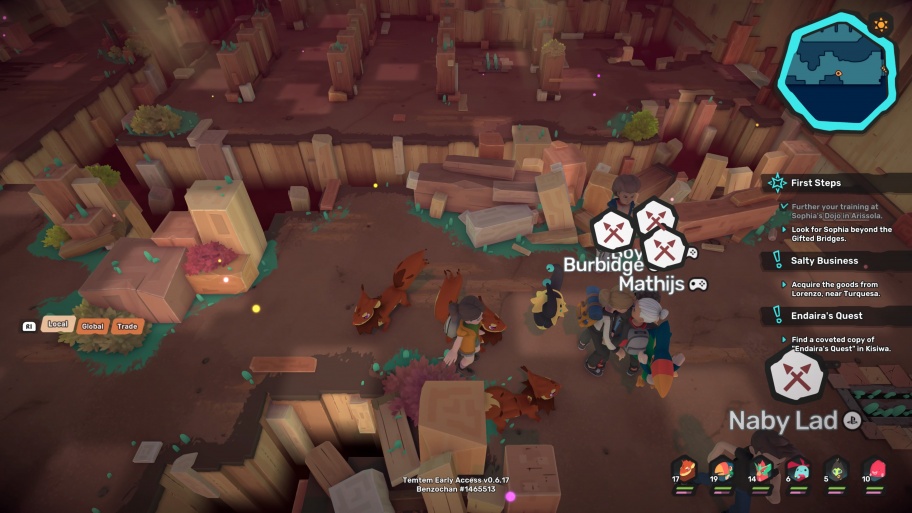 Crowds of people are usually seen near coaches challenging a player to a duel.
The PlayStation 5 version supports cross-play, but there is no transfer of progress from the PC yet – they promise to add it later. Temtem for PS5 cannot boast of anything special: it looks nice, it is controlled conveniently, but the newfangled features of the gamepad are not used here, and there are no prizes – early access after all. In Events, you can quickly switch between the main plot and PvP, but that's it. ***
Temtem development continues – some buildings cannot be entered, not all regions are ready, a complete collection of Temtems cannot be assembled. But there is something to spend here for more than two dozen hours. Already, the game looks like a very worthy alternative to Pokemon – although some of the ideas are frankly copied, there are also some here, and a more difficult story campaign, coupled with normal multiplayer, may interest fans of such gameplay.