The Image & Form studio is best known for the prolific SteamWorld game series, of which SteamWorld Dig and SteamWorld Dig 2 are arguably the most illustrious representatives. But with The Gunk, the Swedish developers finally dare to change the universe. Did Microsoft help them take the plunge? In any case, the game has been featured on various Xbox Showcase, is only released on Xbox and PC, and is available “day one” on Game Pass. We will see that this situation suits him quite well.

Attracted by a signal from an unknown planet, two space transporters decide to improvise explorers. While Becks stays with the ship, Rani goes on an adventure. It is therefore obviously this last character that we embody. The game uses a third person view and offers us a gameplay more oriented towards exploration than combat. Rani is thus able to scan the local flora, in order to learn more about this mysterious planet. Certain plants are only decorative, others give access to resources (metal, fibers…) used to improve our equipment, and still others can be used to progress in the decorations. Vegetable scales to be unfolded, explosive bulbs intended to free certain passages, and other seeds to be thrown into energy cracks to grow mushroom platforms are thus on the menu. These different options serve the exploration of a relatively linear world, admittedly, but carefully constructed. You never get lost, there are a few slightly secret areas to unearth, and the developers have not forgotten to play on the verticality from time to time. So yes, an open world would have given us much more the impression of exploring a new world. But we cannot decently ask a small independent studio to compete on this point with the biggest productions. And then this relatively compact aspect has certainly helped the developers to better control the end result, including graphically. Technically and artistically, The Gunk equals, if not surpasses, titles with a development budget ten times greater. The Unreal Engine is used brilliantly, the slightly cartoony characters are never ridiculous, the animations hold up perfectly, the colors are chosen with care and, above all, the extra-terrestrial flora and fauna amaze us. The icing on the cake: English voices always sound perfectly right. 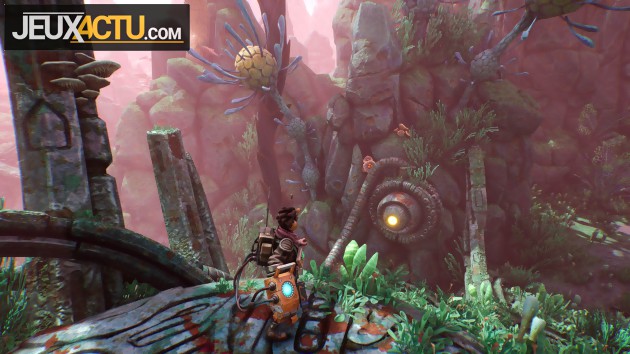 DIRTY, IS IT CLASS? 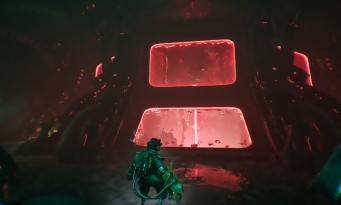 Beyond the exploration previously mentioned, the main gameplay mechanics is the one that gives the game its name: Gunk (or Crasse in good French). This black and reddish moving substance literally suffocates the environment, but Rani's glove of power is thankfully able to suck it up and thus bring it to naught. Each cleaned area instantly regains color, literally and figuratively. Nature then takes back its rights and plants come to brighten up the atmosphere and / or open a new passage for us. It sometimes leaves the Gunk of small creatures that one must also “suck-eliminate”, but these imitation-fights turn out to be rather anecdotal. Be careful, these clashes are far from being unpleasant! But they do not offer a challenge sufficiently met to be truly remarkable. This is also where the game begins to betray its lack of scope, because the general feeling of progress remains quite weak. Even unlocking an Energy Pulse Cannon after a while doesn't really change the game. It just allows you to activate mechanisms dedicated to solving puzzles that are never very complicated. These mechanisms come from ancient structures and betray the presence of a lost civilization, which Rani will seek to awaken. The second half of the game therefore tends to abandon natural spaces in favor of interior spaces, a bit less attractive and original. These levels are still pleasant to walk, but we would have gladly taken an additional dose of extraterrestrial vegetation. The Gunk actually leaves a little taste of too little in general, since it takes less than five hours to get around it.